When I think of my father, I think of the way he fought for custody of my brother, sister, and me, despite being a rock ‘n’ roll disc jockey and bachelor at the time. Our mother had been neglecting us and he won sole custody of us when I was eleven; in 1976, sole custody was a rarity for any father. 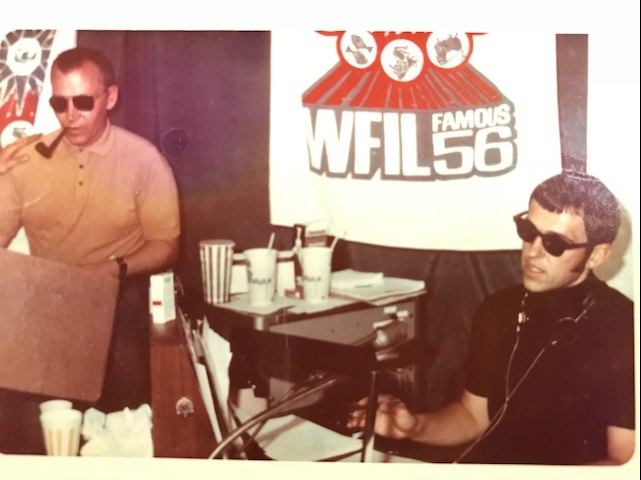 I think of the way he would make us a hot breakfast – usually pancakes loaded with butter and syrup – before school when we had an important test. I remember, too, how patient he was in helping me learn how to throw a softball and sometimes make contact with the bat, despite how pathetic a player I was. My father was not a patient man. He was an overachieving perfectionist, once rated the best DJ in the country by Billboard magazine and later the best Sportscaster in the country. Some say he inspired ESPN’s Sports Center; for sure every aspiring sportscaster studied his show and several of the current sportscaster’s interned or worked for my father. This is the other side of my father:  his public image and fame.  I admire this side of him for all his accomplishments, but I wonder about what it cost him as a father.

In the years before and after my father got custody, we were close. He was larger than life as a person and even larger as my father and sole parent. The cracks in our relationship started slowly, a tragic trifecta of my high school years, his getting fired as a DJ, then working relentlessly to succeed as a sportscaster, and his remarrying. Our step mother did not want children, but we were part of the package, like it or not. After our move from New Jersey to Maryland, as my dad was building his following at WRC and later for his nationally syndicated show, The Sports Machine, his 60-hour workweeks turned into 80. In New Jersey, we saw our father most days; in Maryland, it was only a few hours a week, on Saturday or Sunday mornings before we each went to work, him to the TV Studio or to a sports event, me to a weekend waitressing job. My stepmother worked with him, so taking care of the house and my younger sister again became my responsibility. Initially, I lived up to my father’s high expectations, but when I put on weight, he would say, “Boys will only want you for one thing. Two tons of fun are better than one.”  He’d laugh his boisterous, deep laugh, trying to be cool while softening the blow. The remark hurt, of course, and I resented that he expected me to be that perfect. I mean, at least I wasn’t home alone throwing wild parties while he was away for a rodeo or Super Bowl. Being a good girl and honors student was not enough for him.

Tensions were rising between my father and me, worsened by a boyfriend he didn’t like, but the final straw happened when I was a freshman in college; my father called me on the dorm phone, angry that I had not told him about an award I had received for student of the year and told me not to bother coming home again. His temper is legendary. I’ve seen him throw a carousel of music tapes across a studio; he broke his foot once for kicking a chair in anger; and we had at least one hole in the kitchen wall from one of his outbursts. My father had often threatened my brother with not being allowed home (he was the wild one), but not me.  At the time, I didn’t understand enough about family patterns and narcissism to realize my father was imitating his own father’s parenting approach. Pop, my grandfather, had disowned a daughter for getting pregnant out of wedlock. As devout Catholics, perhaps that was the norm in the 1950s.

During our first rift in college, my father’s anger lasted a full two years. By the time we eventually reconciled, I had learned to pay for my own tuition and rent, working multiple jobs to stay in school. I was used to taking care of myself—a point of both pride and irritation for my father.  My father wanted me to need him, to not be able to survive without him, but he would have been embarrassed if I had failed. In those two years of our estrangement, I learned I could survive without him financially, but not emotionally; I needed his love.

After we reconciled, he declared me a success after seeing my name on a store plaque for sales person of the month for multiple months. He vowed never to turn his back on me again. But he did.

The next transgression was for moving away and marrying the only boyfriend my father had ever liked – a Swiss foreign exchange student, a man as ambitious as my father. The build up to our wedding makes Megan Markle’s family look normal; I walked myself down the aisle, still hoping my father would show and not wanting anyone else to take his place beside me. I didn’t understand then that my father probably wanted me to marry the Swiss boyfriend, but to stay in Maryland instead of moving to Switzerland. This is the other tricky thing about narcissists; they expect you to know what they want, even when they can’t say for themselves.  This next rift would last for 20 years. My first marriage was short-lived. While I was used to the emotional roughness, I called it quits after my Swiss husband drew blood by slamming me into a wall for failing to remember a particular German word. (Bise. It means cold, north wind, and I have never ever forgotten again).

I later remarried, so I did get to a happily ever after, but one my father was never part of. I wrote to him for years, until he eventually told me to stop.  I sent him pictures of his first granddaughter, offering to bring her to DC so he could meet her. He never responded. Ditto when my son was born. Does this make him a bad father? Or simply a broken person? It’s only with 30 years of hindsight that I understand that my moving away hurt him in a way that he could never get over. Anger, for him, was the best antidote.  Fans who idolized him could fill whatever void I left, and could fill the need his own abusive upbringing created. No doubt, my step mother fanned the flames of anger, an unfortunate cliché in an already fragile family dynamic.

I have often wondered how my father would see my husband, now of 24 years. He would have liked him as a jock (rugby and soccer) and sports enthusiast. But would he have looked down on him for choosing his family—putting me and our kids first — when he traded a high-powered corporate career for a less glamorous job with less work travel?  It hurts to ponder that.

I never gave up on my father, though, never stopped believing that he could once again be the good father I remembered him as. I assumed it would be after he retired, when he would be forced to slow down and allow the memories and what-ifs to re-ignite his soul.  He would have relished in my son, his grandson, being recruited to play football in college.  Some might say such a reunion was wishful thinking on my part. For sure, I wished—and prayed— for this, but also, Pop too had softened and eventually made peace with his disowned daughter.  Couldn’t my father have repeated this pattern too? Maybe I would have been less hopeful had I thought more about how my father never spoke to that sister again, even though she and Pop had reconciled. Or maybe we too would have had our happier ending if my father hadn’t died so suddenly after retiring; his friends say he thought he could beat the lymphoma.  I can only wonder now and remember the times he was a good father.

2 thoughts on “Good Father, Bad Father? How We Define Our Dads”